Let’s start by making the statement that automating end to end, full stack tests against a non trivial web application with any degree of asynchronous behavior is just flat out hard. My shop has probably over done it with black box, end to end tests using Selenium in the past and it’s partially given automated testing a bad name to the point where many teams are hesitant to try it. As a reaction to those experiences, we’re trying to convince our teams to rebalance our testing efforts away from writing so many expensive, end to end tests and unit tests that overuse mock objects to writing far more intermediate level integration tests that provide a much better effort to reward ratio.

As part of that effort, consider our theoretical, preferred technical stack for new web application development consisting of a React/Redux front end, an ASP.Net Core application running on the web server, and some kind of database. The typical Microsoft layered architecture (minus the obligatory cylinder for the database that I just forgot to add) would look like this: 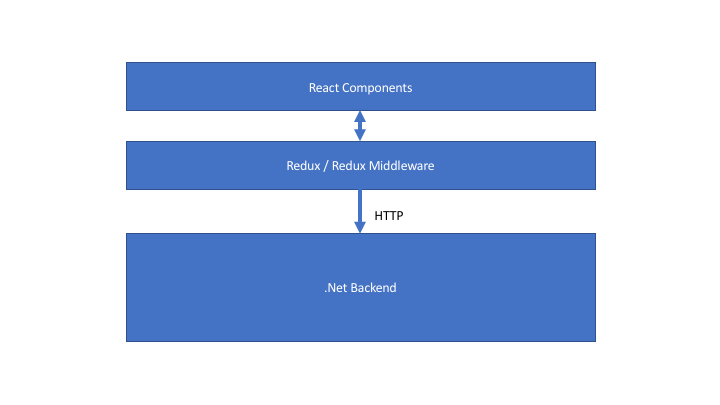 Now, let’s talk about how we would want to devise our automated testing strategy for this technical stack (our test pyramid, if you will). First though, let me state some of my philosophy around automated testing:

Here’s more on what I  think makes for a successful test automation strategy.

Now, to make that more concrete in regards to our technical stack shown above, I’d recommend:

The big thing that’s missing in that bullet list above is some kind of testing that can weed out problems that arise in the interaction and integration of the React/Redux front end and the .Net middle tier + the backing database. Tomorrow I’ll drop a follow up blog post with an experimental approach to using Storyteller to author data centric, subcutaneous tests from the Redux store layer down through the backing database as an alternative to writing so many functional tests with Selenium driving the front end.

A Tangential Rant about Selenium

First off, I have nothing against Selenium itself and other than the early diamond dependency hell before it ilmerged Newtonsoft.Json (it’s always Newtonsoft’s fault) and various browser updates breaking it. I’ve had very few issues with the Selenium library by itself. That being said, every so often I’ll have an interaction with a tester at work who thinks that automated testing begins and ends with writing Selenium scripts against a running application that drives me up the wall. Like clockwork, I’ll spend some energy trying to talk about issues like data set up, using a testing DSL tool like Cucumber or my own Storyteller to make the specs more readable, and worrying about how to keep the tests from being too brittle and they’ll generally ignore all of that because the Selenium tutorials make it seem so easy.

The typical Selenium tutorial tends to be simplistic and gives newbies a false sense about how difficult automated testing is and what it involves. Working through a tutorial on Selenium that requires you to control some kind of contact form, then post it to the server and check the values on the next page without any kind of asynchronous behavior and then saying that you’re ready to do test automation against real systems is like saying you know how to play chess because you know how the horse-y guy moves on the board.

View all posts by jeremydmiller

One thought on “Automated Test Pyramid in our Typical Development Stack”